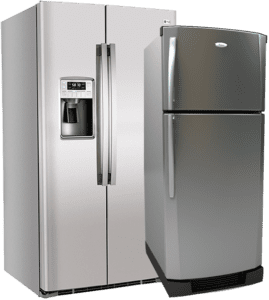 We all know that even the best appliances will eventually have problems. Regular maintenance and knowing what to look for can help prevent unexpected repairs. Pay attention to the symptoms shown by your refrigerator in order to find the source of the problem. Main problem most refrigerators are having in the hot summer days is that the refrigerator is not cold enough, this can be a cause by wrong refrigerator usage but also by parts needed to be repaired. Few things you might check prior seeking technician assistance.

Unplug the refrigerator before attempting any maintenance or cleaning, to minimize the possibility of electric shock.

Before the invention of the refrigerator, ice houses were used to provide cool storage for most of the year. Placed near freshwater lakes or packed with snow and ice during the winter, they were once very common.

The first small refrigerating machine was designed in 1755 by William Cullen, a Scottish scientist. His principle behind refrigeration still remains today.

Oliver Evans designed the first refrigeration machine in 1805 that didn’t use liquid and instead used vapor to cool.

When your refrigerator is not functioning properly and you want to get to the bottom of the problem try going over the most common listed issues that can cause you fridge not to work
While some of the issues they identify have relatively simple fixes, others require a service call from ARNI Services.

If your are concerned with your appliances performance, don’t hesitate to contact our professionals at ARNI Services,  Appliance Repair for a full diagnose and repair service.

If your are concerned with your appliances performance, don’t hesitate to contact our professionals at ARNI Services –  Appliance Repair for a full diagnose and repair service – you can’t put a price tag on peace of mind.