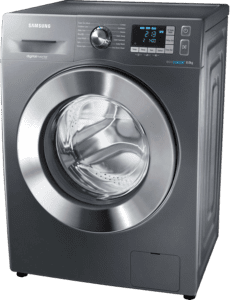 How can a blockage in the washing machine be removed and is it possible to do it on your own? Maybe, but you need to know the design characteristics of your washing machine’s drain system. Furthermore, there are various types of blockages and, consequently, various ways to remove them.

You have to take good care of your washer if you want to extend the life of the household unit. If you still have to face a clogging problem, it’s crucial to remove it quickly.

Most frequently, a blockage is the effect of small particle accumulation in the filter, which is part of the dirty water drain. Other causes of drain issues include:

Blockages are divided into two types:

The unwanted entrance of small objects into the filtration unit causes mechanical blockages. Tiny objects stuck in the tank of the washing machine, which pass into the drain hole along with dirty water, block the drain mechanism and interrupt the machine’s regular activity.

The list of objects that the technicians remove from the filter is quite large:

One small object in the drain system may not cause problems, but small items accumulate if the filter is not cleaned regularly, finally blocking the drain completely to remove dirty water from the washing machine.

In addition to the mechanical blockage  of drainage by foreign objects, the normal accumulation of lint, feathers, fur, hair in the filter can also cause a blockage. This type of blockage is created gradually, over a relatively long time, compared to mechanical ones. To avoid this, it is important regularly to remove the accumulated debris from the filter.

Preventing blockages in the washing machine

Washing has become one of the simplest household chores, thanks to modern technology. However, when using an automatic machine, users regularly encounter some difficulties.

Common washer complaints are as follows:

All these problems can be linked to the formation of blockages, which means that water can not enter the sewer system freely.

It is enough to follow  simple rules in order for the washing machine to work smoothly:

Check the pockets of the clothes you are going to wash, remove all small items; use special mesh bags to prevent the entry of foreign items into the drain system; fasten zippers, buttons, buttons.

Do not wait until your irreplaceable helper herself needs emergency help – periodically clean the filter and drain hose.

Although people have been washing their clothes for about two hundred years it is only at 1691, the first English patent in the category of washing machines was approved.
As early as 1904, newspapers advertised and debated mechanical washing machines.  The invention of the electric washer has been mistakenly attributed to Alva J. Fisher. But US Patent Office shows at least one patent issued before Fisher’s US patent number . The “inventor” of the electric washing machine remains unknown.

There is no getting around the fact that sometimes washing machines brake and when they do you need a washing machine repair company that is honest and you can trust. You found them, at ARNI Services we have washer repair technicians and specialists that will fix your washer machine.

If your are concerned with your appliances performance, don’t hesitate to contact our professionals at ARNI Services,  Appliance Repair for a full diagnose and repair service.

If your are concerned with your appliances performance, don’t hesitate to contact our professionals at ARNI Services –  Appliance Repair for a full diagnose and repair service – you can’t put a price tag on peace of mind.